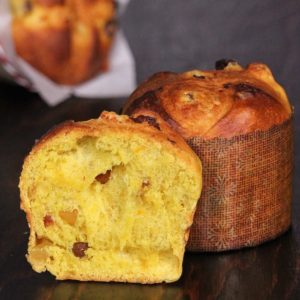 Italian Panettone is a very traditional Christmas recipe, a buttery sweet bread made with egg yolks, candied fruit and raisins.This eggless version was highly requested from my followers who can't have eggs because I previously shared the classic egg Panettone recipe.Both of my Panettone recipes are beyond easy to make! Usually traditional Italian Panettone is very long and difficult to prepare: you could need many days since it's made with sour dough and not with yeast and you usually need a professional stand mixer; but with this recipe you'll get a delicious Panettone with the classic original flavor without effort!I have substituted egg yolks with a mix made with milk and turmeric powder, but don't worry, you won't taste turmeric, I used it just for the yellow color, since Panettone is slightly yellow thanks to the yolks. It tastes like the traditional Panettone, even witout eggs! The texture is slightly different because I made it without stand mixer or kneading by hands so everyone can easily make it at home!
Print Recipe Pin Recipe
Prep Time 20 mins
Cook Time 20 mins
Proofing Time 2 hrs 45 mins
Total Time 3 hrs 25 mins
Course Bread, Dessert
Cuisine Italian
Servings 9 Mini Panettoni
Calories 300 kcal

Store at room temperature closed in a blastic bag for about 4 days or in freezer for about 2 months. You can slightly warm up in microwave before have it.

Hello, I am Valentina! Welcome to How Tasty! 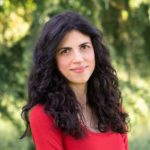 I am an Italian girl in love with baking and cooking. I’ve been raised in a cooking family, baking since I was a little girl and learning from my mom and my professional chef grandma.

You don’t need to be a professional cook to follow all my recipes thanks to the video tutorials and the tips & hints you can find here.

NEW RECIPE! Only 3 ingredients for this incredibly

My Red Velvet Lava Cake is an impressive and incre

My NEW recipe is all about the most Fluffy and irr

Tired of your boring sandwich? Let's try my Potato

Only 4 ingredients for these delicious Nutella Bro

Only 3 ingredients, a food processor and you can e

Are you craving for Cinnamon Rolls right now?He

Ready to come back to work getting off the new yea

Do you know why Penne alla Vodka is considered alm

BIG NEWS: you can shop my Gingerbread Limited Edit

My Meringue Roll is a great last minute Christmas

For those of you asking me for Eggless recipes, he

My Last Minute Red Velvet Cake for Christmas is th

With my Italian Panettone Easy Way you can easily 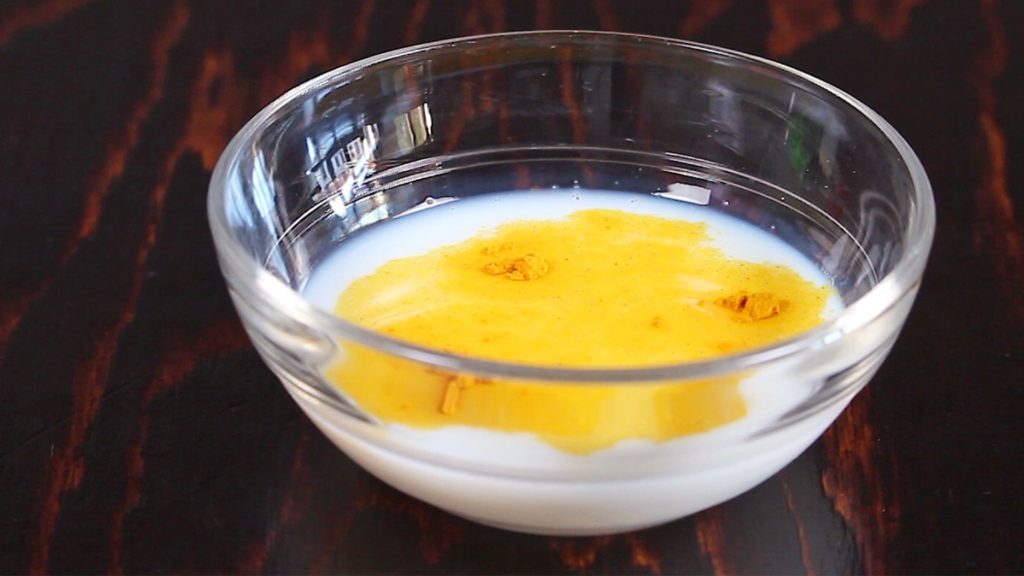 When my followers asked for eggless Panettone, I thought it was almost impossible. I already have planned a super easy recipe instead the traditional Panettone recipe, I didn’t use stand mixer, I used the yeast instead sour dough, the rising time was short…could I have skipped the eggs too?

I was pretty surprised when i made the first attempt: the dough tasted so close to the classic one (except for the texture, but this is not because the egg lacks but because of the simplified method I used for making the dough)!

But the aesthetic was not so good for me, it was too pale in color, it didn’t look like Panettone!

So I decided to use Turmeric powder because I’ve already used it before for my eggless recipes and I was very satisfied with the results, that’s why I added this beautiful golden powder: to look my Eggless Panettone like the regular one without changing the taste.

People who don’t like Turmeric can be sure: I used so little of it, than you can absolutely can’t taste it! 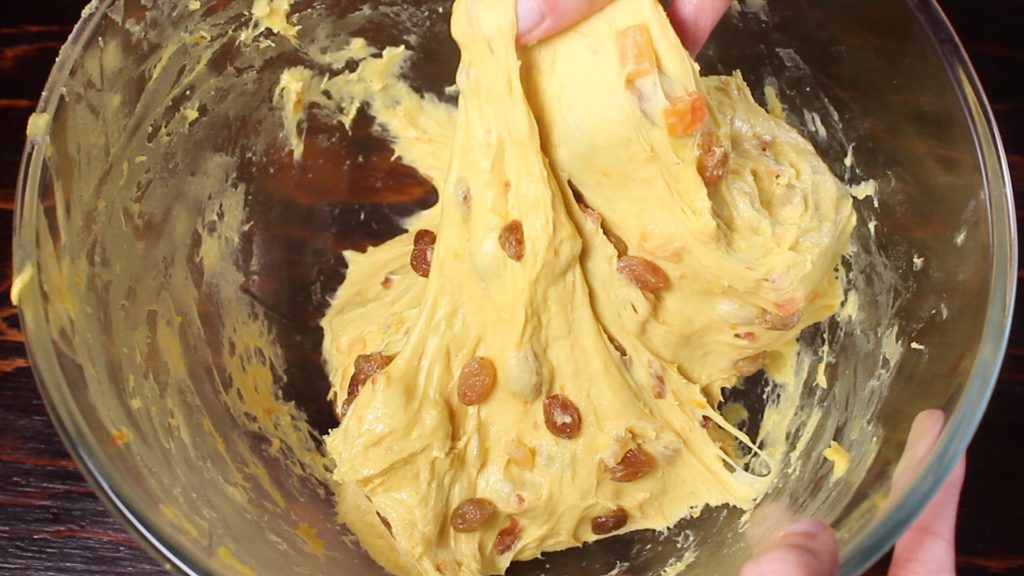 I used Manitoba flour, a very strong bread flour with a huge amount of protein/gluten.

Depending on the flour you’re going to use, you may need more or less flour, for this reason consider that you should get a soft and sticky dough or your Panettone will turn out dry.

Watch my recipe video to see the consistency of the dough: if yours turns out too wet, add a bit more of flour (be careful to not add too much!), if it turns out too dry, add more water. 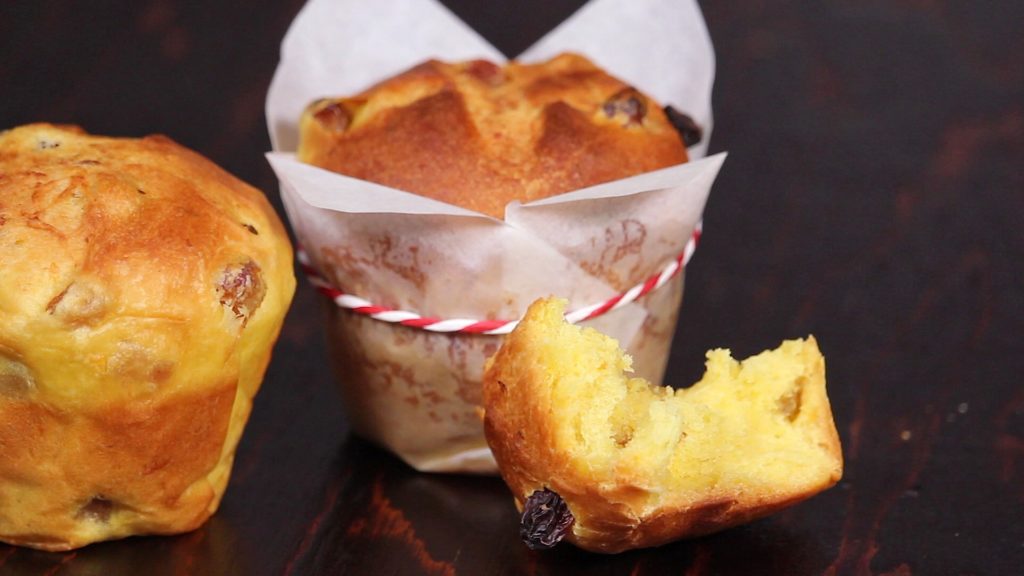 I didn’t use a stand mixer for this recipe, neither I kneaded the dough by hands (it would be too sticky to touch it), so I mix it in the bowl for few minutes using my spatula, just until it became less sticky.

If you have a stand mixer, feel free to use it, it could be helpful. You can knead it for about 15 minutes or until it becomes smooth. 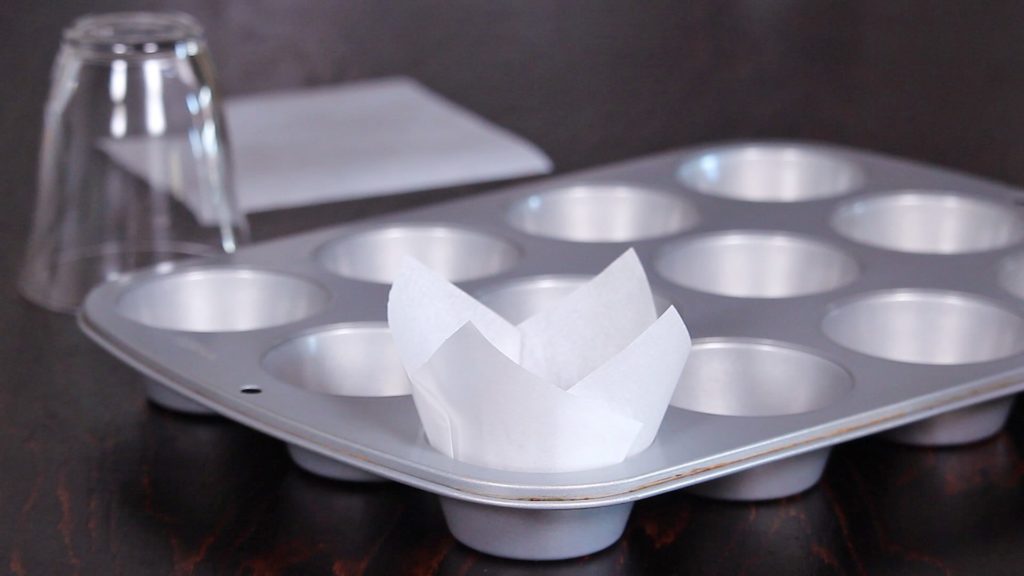 In the recipe video I show you how to easily make your own Mini Panettone paper molds, it’s pretty easy and funny too! You can use this technique for muffin molds too.

I started from a 15x15cm-6x6inch parchment paper squares, I folded in half, then in half again, then I shaped and folded it using an upside glass. That’s it! 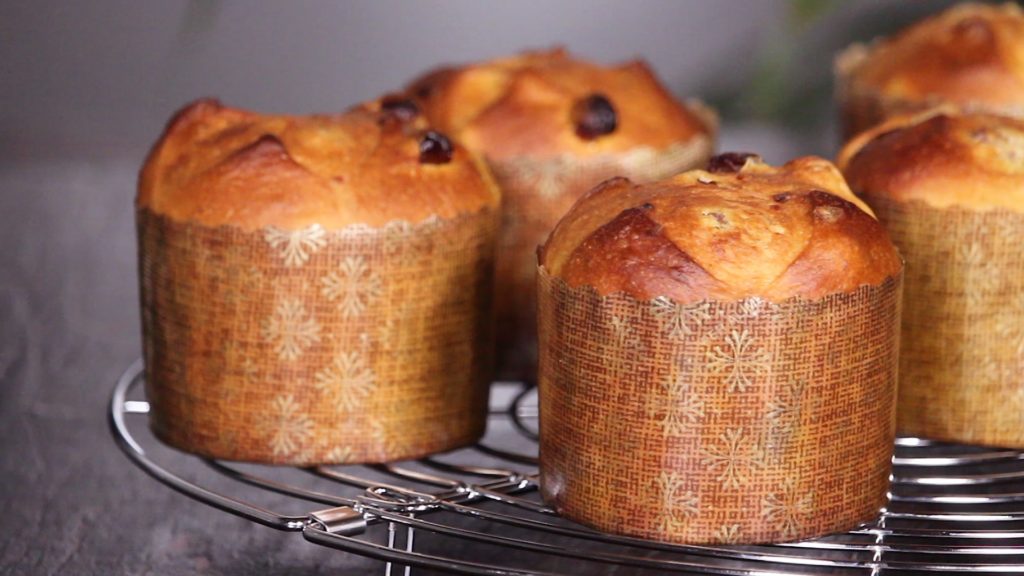 If you can find traditional Panettone paper molds, you can absolutely use them, it’s always the best choice.

With this recipe you’ll get about a 1kg Panettone, so you can use a huge 1kg mold (follow the instructions for my egg Panettone recipe to place it upside down to cool down), or you can use 9 mini Panettone molds (100 g each one).